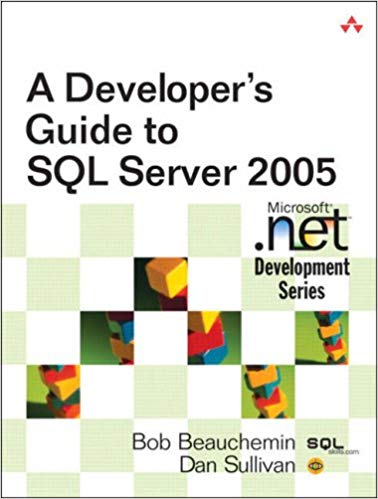 “I come from a T-SQL background, so when I first laid my eyes on SQL Server 2005, I was shocked–and then, I was scared! I didn’t have a CLR or XML background and suddenly had an urgent need to learn it. SQL Server 2005 is too big of a release to learn from the books online. Fortunately, now there is a book for developers who need to go from SQL Server 2000 to SQL Server 2005 and to do it as painlessly as possible. Basically, it’s one-stop shopping for serious developers who have to get up to speed quickly. I’ll keep this one on my desk–not on my bookshelf. Well done, Bob and Dan!”

“A SQL book truly for developers, from two authorities on the subject. I’ll be turning to this book first when I need to understand a component of SQL Server 2005.”

“An excellent book for those of us who need to get up to speed on what’s new in SQL Server 2005. The authors made sure this book includes the final information for the release version of the product. Most other books out now are based on beta versions. It covers key areas from XML and SQLCLR to Notification Services. Although the wide variety of information is great, my favorite part was the advice given on when to use what, and how performance is affected.”

“While there will be a lot of good books on SQL Server 2005 development, when people refer to the ‘bible,’ they’ll be talking about this book.”

“SQL Server 2005 is loaded with new features and getting a good overview is essential to understand how you can benefit from SQL Server 2005’s features as a developer. Bob and Dan’s book goes beyond enumerating the new SQL Server 2005 features, and will provide you with lots of good examples. They did a good job striking a balance between overview and substance.”

You’ll find practical explanations of the new SQL Server 2005 data model, built-in .NET hosting, improved programmability, SQL:1999 compliance, and much more. Virtually every key concept is illuminated via sample code that has been fully updated for and tested with the shipping version of the product.